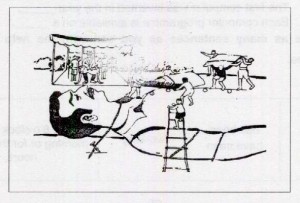 Lamboo was a cook by profession. He was extremely fond of traveling. Once a captain undertook a voyage to a distant country and he asked his friend, LAMBOO, to come with him as the ship’s cook. LAMBOO at once accepted the offer and the voyage began.

All went well in the beginning. Then a terrible storm arose in the sea and the ship was wrecked. Six of the crew, of which LAMBOO was one, got into a little boat and began to row in search of the nearest land. Suddenly, a huge wave came and upset the boat. All other men on the boat were drowned. Only LAMBOO survived, LAMBOO swam as best as he could and kept swimming for miles. At last he was able to reach an island. He was very much tired. He stretched himself on the soft grass and went to sleep.

When LAMBOO woke up it was daylight. He lay still for a moment wondering where he was and then tried to get up. He could not do so, because he was tied to the ground.

Just about that time he felt that there was something moving up his legs. It was a very tiny creature, a man, less than six inches high. This tiny man carried a bow and arrow in his hand. There were hundreds of such tiny soldiers all over him. He roared loudly with the result that they all fell back. one on top of the other. Although LAMBOO was a strong man yet he could manage to break only a few strings. He was taken as a prisoner to the emperor of the island. The emperor was also a tiny thing. LAMBOO had been very gentle and kind to the emperor’s men.

LAMBOO said to the emperor, “Your highness! Could you set me free so that I could go and see your beautiful island?” The emperor said, “No, you can’t go until I have made sure that you don’t carry any dangerous weapons on your person.” The emperor then asked two of his trusted men to search LAMBOO thoroughly. The emperor’s men searched his pockets and wrote down everything they found there. Here are some of the things the emperor’s men found in LAMBOO’s pockets:

A handkerchief which everybody thought was as big as a carpet. A snuff box. LAMBOO always carried one on him. They called this little box a chest tilled with dust.

It made them sneeze.

A knife, a razor and a pair of pistols. All these were new to them. They did not know what they were for.

A watch. They thought that the ticking of the watch was like the loud noise made by a mill.

When the two little men had finished searching LAMBOO’s pockets, they looked at his belt. They thought this was a sword, very large and very sharp. They made a note of this, too, in their list.

The two little men carried this list to the emperor.

“You carry a sword, l understand. Why don’t you take it out and put it on the ground? You have to be disarmed completely.” Said the emperor to LAMBOO.

The emperor then asked LAMBOO about his pistols. He told the emperor not to be afraid. These pistols were empty. LAMBOO fired a shot in the air. Everybody fell down for fear except the emperor who ordered LAMBOO to give up his pistols. LAMBOO did so. And all of LAMBOO’s things were put away in the emperor’s museum.

The emperor thus made sure that LAMBOO was not a dangerous man and set him free.

The emperor asked LAMBOO it he wanted to say anything. LAMBOO said respectfully to the king that the land of the king was a beautiful place. “People are strong and healthy. How could it all be so nice and beautiful!” LAMBOO exclaimed

in surprise‘ The king told him that though they were tiny and small, yet they were wise. They had small families. Each one had a lot to eat and every one was healthy there. LAMBOO thought in despair that his country was overcrowded and not so rich. “Alas! We could do something about it.” He thought to himself.