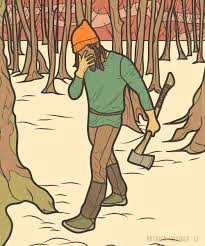 The youngest son, however, was the one who caused his parents the utmost anxiety. It is true that he did not eat much, but this was because he was so small. Indeed, when he was born, he was only the size of a pepper. and that was why he was named Mirchu.

Once it so happened that there was no rain for months on end. A great famine spread across the land and the wood-cutter soon had nothing to give to his family. All the savings were gone and there was nothing left to eat. “We can no longer feed our children.“ The woodcutter told his wife one night as they sat beside the empty hearth. “Whenever the boys get up in the morning for their breakfast there is nothing for them to eat. My dear, there is only one thing that we can do. We must take them into the forest and leave them there. May be some rich man ﬁnds them and takes them home. I am sure that he‘ll take better care of them.”

The poor wife cried and cried. She was so full of sorrow to hear this.
But, at last, as the night wore on, she agreed to her husbands plan. After all, she could not see her children die of hunger. She thought and thought, but no other plan came to her mind. She wished, she had only three children instead of seven. They could have been fed well and brought up nicely. As the woodcutter and his wife argued, they raised their voices. The little Mirchu heard every bit of what they said.

Unlike his brothers, he was not asleep. For a long time he lay thinking what would be the best thing to do. As soon as it was twilight, he got up quickly and crept out of the cottage and off he ran to the forest. He filled his pockets there with small white stones. Then he ran back to the house and was in bed again all quiet and pretending to be fast asleep when his mother called him.

“We are all going to the forest.” His mother told the boys “You must all help your father gather firewood, for there is no money left to buy any food.” The boys were so excited that they completely forgot about their hunger and were in no time on the way to the forest with their father leading. The forest was dark and lonesome but the woodcutter knew every bit of it so well that before long they were right in the deepest pan of the forest. “l will cut down the small trees,” said the woodcutter, “and you boys must collect all the branches and tie them into small bundles. It is going to be hard work.”

With that he cut the trees with his axe and set his seven sons to work. While the boys were gathering as many sticks as they could, the woodcutter nodded to his wife and the two of them just sneaked away.

The boys felt a kind of shudder. They began to shout and call for their father, thinking that he might be playing some kind of a trick with them. When, however, he did not appear for quite some time they really felt frightened and began to cry bitterly. Then the clever Mirchu said, “Do not worry, boys, I know the way home. All we have to do is to follow the trail of the white stones. Father isn’t going to come.”

Mrrchus brothers, however, doubted what he said. At this he repeated what their father had said the night before and told them how he had ﬁlled his pockets with stones and dropped them one by one on the way. So Mirchu led his brothers through the deep forest and along the winding paths until they reached the cottage.

Perhaps we are not going to be welcomed”, Mirchu said softly. “Let us wait outside the cottage for a while and see it we can hear what father and mother are talking about.“

When the woodcutter and his wife arrived home early that day they had found ten silver coins waiting for them. This was in payment of a debt that they had long forgotten about. At the sight of so much money the woodcutter‘s wife wept for joy. But when she remembered that she would never see her boys again, all her joy vanished and she began to sob. “What use was that money to her now,” She thought.

“My sons, my poor little sons.” She exclaimed sorrowfully, “What would I not give to have you safely back home. Perhaps, by now they might have been eaten by wolves.” This was all Mirchu wanted to hear. He pushed the door open and ran to his mother. His brothers followed him too. “Don’t cry mother. We are all here. All safe and sound.“

What joy and happiness there was in the woodcutter’s cottage that night and what a feast they all had as they sat around the table! The woodcutter, his wife and all their seven sons lived happily ever after. Well done, Little Mirchu!