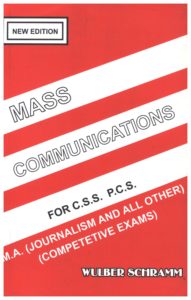 Download the free book Mass Communications by
Wilbur Schramm
The BOOK has been prepared at the request of many students, teachers, and research men who have urged the Institute of Communications Research to supplement its first book, Communication in Modem’ Society, with a volume that would be broader in scope and usefulness. Communications in Modern Society was a symposium intended to assess the state of knowledge in the subject, delineate some of the problems, and point the way ahead in research. Since it has appeared. There have been a number of significant new publications in the field, both articles and books. Among the latter must be mentioned Lyman Bryson’s collection of thoughtful lectures, The Communication of Ideas, the third volume in the Stanton-Lazarsfeld’s series, Communications Research, 1948-49; Harold Lasswell’s collection of the papers on content analysis originally prepared as part of the wartime study at the Library of Congress; Paul Lazarsfeld and Patnicia Kendall’s analysis of the second NAB study, Radio Listening in America; important volumes on public opinion by Leonard Cottrell and others; and the volume by Carl Hovland and others, Experiments on Mass Communication. There has not appeared, however, and probably will not for some time appear, any integrated introduction to mass communications for persons who would like to study them through the windows of the social sciences. This volume has been designed to meet part of the need for such an introduction. By bringing together anthropologists, psychologists, sociologists, political scientists, economists, and media men, it has attempted to combine diversity of approach with unity of target. Some of the selections in this volume were written by members of the Institute of Communications Research; more were not. All of the selections have been used in the Institute. And we are glad now to make them available for wider use.