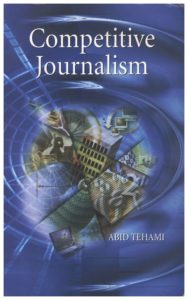 Free Download the book Competitive Journalism by
Abid Tehami
Mass communication now has become the most important International of subject.
Not only because the readers and the audiences of the world, read newspapers, watch T.V and listen to radio programs, produced by all countries.
But because it is this subject with its rich technical potentialities and its abundant creative invention that particularly provides. An International meeting place for living ideas,
Yet the first half century of the history of Mass Communication has witnessed remarkably little exploration of its infinite possibilities,
In this book, I have tried to encompass this. The real purpose of this book is to prepare students for competitive exams. (C.S.S, P.C.S). I don‘t claim that this book of mine is the finest on the subject but among the books we have on competitive Journalism, this is the only one that touches almost every aspects and is closest to the latest syllabus of C.S.S. and P.C.S
The book is also useful for the student of BA and MA. Mass Communication Last Chapter of this book provides detailed terminology which is not only useful for written exam but would also help students preparing for vivas.
The first edition of competitive Journalism was published in August, 1989. Now the new (10Th) edition is being published and every effort has been made to remove mistakes of proof wading and improve according to new trends, some new topic have been included and more details added to the old ones.
I do not claim that-the “competitive Journalism” is the best book on the subject but every effort has been made to distinguish it from all the others. Its real worth will eventually be determined by the readers themselves and all suggestions regarding its improvement will be warmly welcomed.
I am thankful to Prof. Khalid Baig, Amber Tariq. Munir Ahmed, Zafar Haider and Abbas Rashid. I am also thankful to all radars of my book .who sent their suggestions’ for improving it and the people who sent letters of appreciation.

Journalism means writing of newspapers or magazines. It is the communication of information through writing in periodicals and newspapers. The people have an inborn desire to know what‘s novel or new. This curiosity is satisfied by journalist through their writing in the newspapers and journals on current affairs and news.
The word journalism is derived from journal. Which means a daily register or a dairy. Today the word journal also connotes a newspaper published every day or even less often or a magazine Thus journalism means the communication of information reading the events (if a day through written words, sounds or pictures. And or a journalist is a person who writes for or conducts a newspaper magazine. He is also called a press man.
The earliest journalism is connected with periodical journalism. A periodical is printed at a regular and fixed interval. A periodical can be called a newspaper if it appears at least weekly in recognized newspaper format and has general public interest.
In the modem era, the press is called the “Fourth Estate” of the state. It enjoys a very important and significance place in society and plays an essential and vital role in democratic process.

The need to communicate with our fellow beings is as fundamental as the physical requirements of food and shelter this urge for communication is a primal one in our contemporary civilization a necessity for survival.
Communication not only maintains and animates life but it is also the motor and expression of social activity and civilization, it leads people and peoples from instinct to inspiration. Through multicolored processes and systems of enquiry, command and control it creams a common pool of ideas, strengthens the feelings togetherness through exchange of messages and translates thoughts into actions. Reflecting every emotion and need from the humblest takes of human survival to supreme manifestation of creativity.
In the early stages of civilization. As mentioned before, the delivery of news from one place to another place was rather slow and depended entirely on the speed with which the messenger could run or ride.
in the fifteen-century human ingenuity created major breakthrough in the technology the invention of moveable type People could now produce and send message much faster Two important developments followed the invention of moveable type. First, the use of paper making machine in the 18th century and Second, the application of steam power to the printing press.
Three other 19’h century inventions further aided the ability to communicate First, the development of major transportation systems ‘in the world and Second, just as railroads began to prosper, he telegraph arrived. The third major development of the century, the device that enabled people to send voices over the wires. Just as the 20th century dawned a system was perfected by which electromagnetic impulses could be sent through the air without wires carrying voice transmission over long distance…..For More Download Book