An old man had a lot of money. He did not know where to keep it.There were no banks in those days. He hit upon an idea one day. He dug up a hole in the floor of his bedroom and 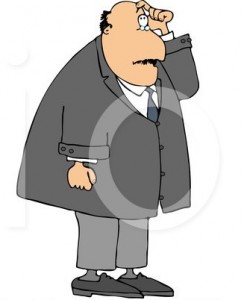 put away all his money in that hole. He filled up the hole with such skill that it became a part of the floor again. Nobody could tell where the hole was. After this the old man completely forgot where he had hidden his money and where he had dug up the hole in the floor. He had forgotten all about it. Quite often after this he had needed the money but he didn’t know where to find it. He had not told any of his relatives or friends about the hole. They, therefore, could not come to his help.

One night a thief came to his bedroom. The old man was very much frightened. He hid himself under his bed and let the thief operate. The thief dug up the hole and began to take out the money. When the old man saw his money he gave a loud shriek. The thief got frightened. He dropped the money and ran away. The old man was very happy. After all he hag found his money. He was so excited about his discovery that he ran to tell his friends about It.

Friends : You look so happy today. What has happened?

The forgetful man : You know I had hidden away all my money. I had done so a long time ago and I had forgotten completely about it. I have found it today. That‘s why l am so happy.

Friends : Where had you hidden away your money?

The forgetful man : I had dug up a hole in my house, dear friends. I had put away all my money in that hole. I had filled up and covered that hole completely and had forgotten about this hole altogether.

Friends : That certainly calls for a treat. Doesn’t it?

2 thoughts on “The Forgetful Man”