There lived some rabbits in a jungle. They lived happily with one another. They run freely and played different games in the evening. 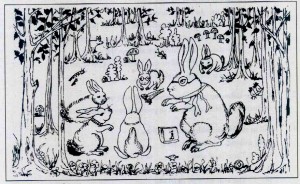 One day, a terrible wolf cam in the jungle. When he saw so many rabbits at one place, he become very happy. The rabbits were playing some games in a circle. The wolf entered the circle silently. No one took notice of him. When the rabbits saw the horrible wolf, they were frightened. All of them tried to run to save their lives. However, the wolf caught a rabbit and ate it up.

After that, he came there every evening. He used to catch a rabbit and eat it. The rabbits were very scared because their lives were in danger. They wanted to get rid of the cruel wolf. There was an old rabbit in the jungle. He was very wise and intelligent. They went to 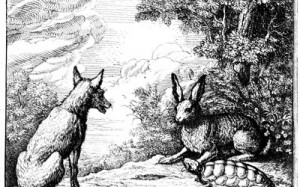 him told him their problem. For a moment there a deep silence. After a little pause, the old rabbit broke the silence and told the solution. He said, “There is a deep well in the Jungle. Cover it with straws and leaves”. They did so. In the evening, the wolf came again. All the rabbits. Stood at the other corner of the well opposite to the wolf. The wolf runs to catch a rabbit. Soon, he fell into the well and broke his legs. He cried for help but no one helped him. He remained there and died. All the rabbits were free and happy again. They went to the old rabbit and said, “Thank you very much. Now we shall all live happily.” They lived happily thereafter.

2 thoughts on “An Intelligent Rabbit”