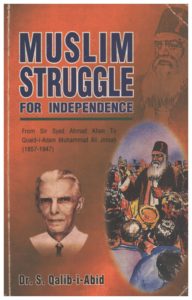 Free download the Book Muslim Struggle For Independence From Sir Syed Ahmad Khan To
Quaid-i-Azam Mohammad Ali Jinnah
(1857-1947)
Dr. S. Qalb-i-Abid
PREFACE
This book had been in the making ever since my return from the U K in 1986 after my Ph. D. research which was published under the title The Muslim Politics in the Punjab, 1921-47 (Vanguard Books 1992).

I was extremely fortunate in having collected research material. During my research in London. Leeds and Cambridge. For a book on the struggle for Pakistan. It took almost eight years in writing.

Drafting and redrafting the manuscript in order to maintain a reasonable length. Some material therefore has been eliminated inevitably. So as to leave out some unnecessary account of events.
In writing this book my sincere and grateful thanks are due to many, First and foremost. My thanks are offered to Professor David N. Dilks. My research supervisor at the University of Leeds.

Currently Vice-Chancellor of the University of Hull. Professor Dilks had been supportive in many ways, more than the words and phrases can communicate. I also owe a particular debt of gratitude to Professor Dr. Bimal Prasad of Nehru University.

Delhi. Who joined the University of Leeds in 1982 as a visiting professor? I am deeply grateful to him for sparing time for frequent sittings with me and allowing me to benefit from his knowledge and insight whilst discussing some important issues relating to the freedom movement in India.

I was able w exchange views with other eminent Indian scholars like Professor S. R. Mehrotra at the India Office Library and Records. London. Professor Mehrotra also delivered a series of lectures at various British Universities on the freedom movement in India which were thought-provoking for me.
Similarly, Professor Euganee Irschrik of the University of California Berkely was also kind enough to offer his comments on various mam relating to my conclusions on the freedom movement in India. I am also deeply grateful to Professor Dr. Syed Razi Wasti, my teacher and research supervisor at Government College. Lahore during post-graduation.

I was able to benefit from Prof. Wasti’s comments on a number of occasions. I am also deeply grateful to Dr. Z.H. Zaidi for throwing light on various aspects of Quaid-i-Azam’s life and policies……..